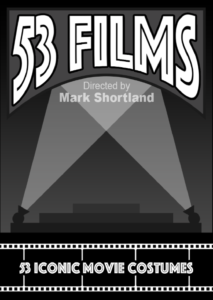 This is Mark’s third deck of cards produced from his paintings. Each of the 53 cards depicts an iconic movie costume from a famous film.

Painted in Acrylic, 20 x 25cm in size, the work was completed over a four month period while at sea on board various cruise ships.

The paintings were scanned at high resolution and transformed into the deck of cards.

The one way face design allows for larger figures and the indices were created from Mark’s handwriting.

52 playing cards in a standard deck

Two Jokers, one colour and one Black and White.

Two Information Cards naming the movies in which the costumes appear.

Below are a sample of the cards in the deck